Cotton Mesa Offers a Variety of Exotic Hunts in Texas

Hunting Exotics is one of the most popular hunting adventures at Cotton Mesa. We provide affordable exotic hunting with the best accommodations to all guests. Prices vary depending on the exotic game you choose to hunt.

Unlike whitetail season, which has a regulated season, Exotics can be hunted year round. 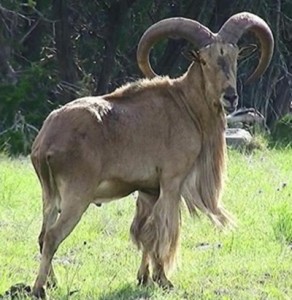 Texas is home to more Aoudad hunts, or what some people refer to as Barbary sheep, than their native North Africa. Aoudad are exceptionally sporty animal’s, combining wary nature with tough physical hardiness, liked to a Cape buffalo. This is a great, challenging and rewarding Texas hunting experience. Technically they are not considered a pure sheep and they actually have features of both a sheep and goat. Both males and females grown horns, but the males grow considerably larger horns. Large trophy males in Texas can easily exceed 30 inches. Their long beard on their chest makes a great half life-size or full mount.  At Cotton Mesa Trophy Whitetail, we have some exceptional Trophy Aoudad Rams that often exceed 30″.  Trophy Aoudad are one of the most elusive animals to hunt at Cotton Mesa.  We hunt them from stands and 4-wheel vehicles. 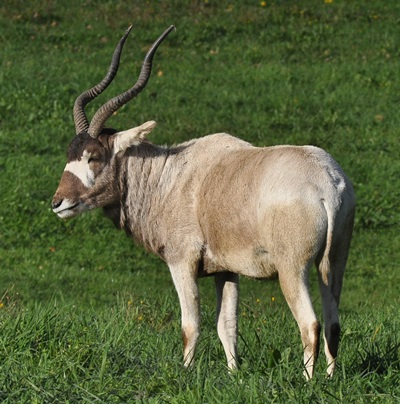 The Addax, also known as the Screw Horn Antelope, is a desert antelope that lives in several isolated regions in the Sahara desert. This species of the antelope family is closely related to the oryx. Although extremely rare in its native habitat, it is quite common in captivity and is regularly bred on ranches where they are hunted as trophies. The coloring of their coat varies with the season. In the winter it is grayish brown with white hind quarters and legs. In the summer, the coat turns almost completely white or sandy blonde. Their head is marked with brown or black patches that form an X over their nose. They have a scraggly beard and prominent red nostrils.  Horns, found on both males and females, have two to three twists and can reach 80 centimeters in females and 120 centimeters in males.  Cotton Mesa has a limited number of Trophy Bull Addax so please call Cotton Mesa for availability. 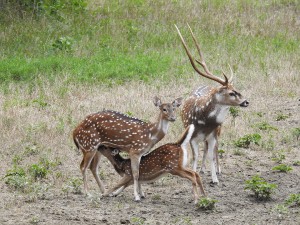 The Axis deer is a moderately large spotted deer with three tines on each antler. Axis deer are native to India, where they are known as “Chital”, and are one of the favorite preys for the Tiger.  Axis deer hunts were introduced to Texas in the 1930’s and are now the most numerous and widespread introduced deer in Texas. Axis deer are about 40 inches at the shoulder and adult males can weight up to 250 pounds. They have reddish-brown coats with white spots along their sides. Trophy males can easily exceed 30 inches. The Axis Buck is a very elusive animal which never stands around for very long.  Fast shots in heavy brush are the norm on a Cotton Mesa Trophy Axis Buck Hunt. They shed their antlers at different times of the year, making them a great summer time hunt.  Hunting Trophy Axis Deer at Cotton Mesa is a very tough but rewarding hunt. 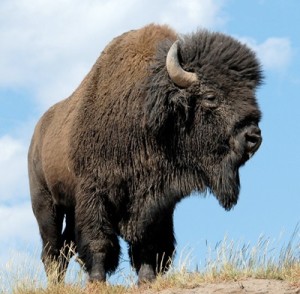 The American Bison, also commonly known as the American Buffalo or simply Buffalo is one of the most impressive trophies in a trophy room. Bison have a shaggy, dark brown coat and can weigh over 2000 pounds. The head and fore-quarters are massive and both sexes have curved horns used for fighting. The meat is very lean and low in cholesterol and there is plenty of it. Trophy Bison Bulls often exceed the scales at over 2,000 pounds.  The sheer size of the animal is amazing. The meat is second to none. At Cotton Mesa, a Trophy Bison Hunt is always an adventure. 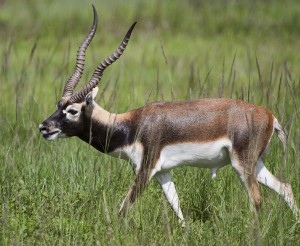 Blackbuck is a species of antelope found mainly in India, but also in parts of Pakistan and Nepal. The horns of the Blackbuck are ringed and spiraled with 3 to 4 turns and can be as long as 24 inches. The adult males can grow as tall as 32 inches and can weigh as much as 100 pounds. The mature male’s upper body is black and his belly and eyes are ringed with white. The law in India protects the Blackbuck, making Texas one of the few places to hunt the elusive Blackbuck.  The Trophy Blackbuck at Cotton Mesa Trophy Whitetail are as wild as anything on the ranch. They love green country and try to keep as much of it as they can between you and them.  Long Shots are the normal on Trophy Blackbuck at Cotton Mesa. 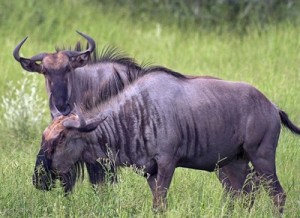 Blue Wildebeest is a large antelope and one of the two species of wildebeest.  The bulls weigh up to 650 pounds and the females up to 550 pounds.  The Blue Wildebeest is a herbivore and primarily feeds on short grasses.  The are native to most of Southern Africa. Cotton Mesa has a select few of Bull Wildebeest that we harvest every year so please check availability.  This is really a rare and unique trophy. 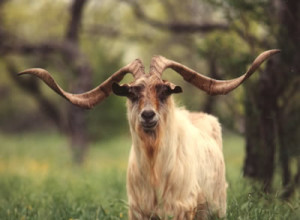 Catlina Goats are feral goats that have gone wild.  They thrive in Australia, New Zealand, Ireland and Hawaii. They are sometimes used for conservation grazing, to control the spread of undesirable scrub or weeds.  The make a great trophy as their horns can have a spread of up to 36″ or more.  At Cotton Mesa Trophy Whitetail, we have many exceptional Trophy Catlina Goats which can be hunted year round. 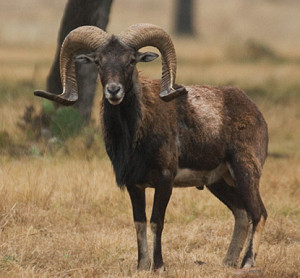 The Corsican Family of Sheep are actually the result of initial crosses decades ago between the shedding, wild Mouflon Sheep with a wide range of more well known “wool” breeds of sheep. Corsican Sheep have a variety of coloring patterns as a result of the various domestic sheep used in crosses with the Mouflon but one of the most familiar color pattern is the pattern resembling the Barbados Blackbelly. Trophy Corsican Sheep at Cotton Mesa Trophy Whitetail are always in season and make a great summer hunt. 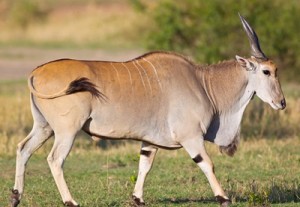 Cotton Mesa Trophy Whitetail is home to some really big Trophy Eland Bulls.  We have the Common Eland which is native to most of all southern Africa.  Their diet is primarily grasses and leaves and large bulls can weigh up to 1 ton.  The meat is considered some of the finest in Africa.  Trophy Eland bulls are solitary and very exclusive at Cotton Mesa. 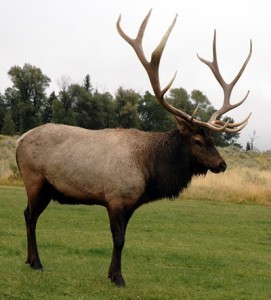 The Elk or Wapiti is one of the largest species of deer in the world and one of the largest land mammals in the world.  Elk range in forest and forest edge habitat, feeding on grasses and leaves.  Cotton Mesa is home to a large breeding herd of North American Elk.  We have a large selection of Trophy Bulls Elk, Management Bull and Cow Elk.  The meat is very tasty, lean, and a healthy choice of meat! 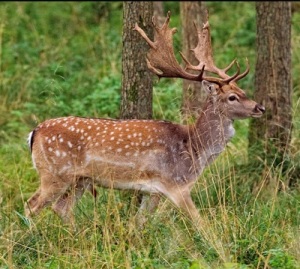 These deer come in three color phases, white, brown and spotted. The trophy bucks have broad and shovel-shaped antlers with many points on top and can weight over 200 pounds. Trophy Fallow bucks retain their antlers sometimes into March, therefore may be hunted a little later in the year. The venison on these deer is very lean and healthy.  Cotton Mesa has a large breeding herd of Fallow Deer.  We have Trophy Bucks of all colors, Brown, Whitetail and Spotted. 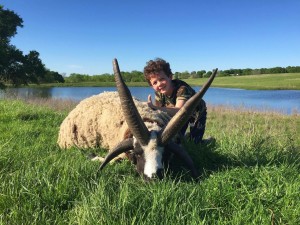 Both males and females are horned, sporting two, four and occasionally six horns. Most striking to many people are four-horned rams with two vertical center horns as much as two feet long, and two side horns curling down along the side of the head. 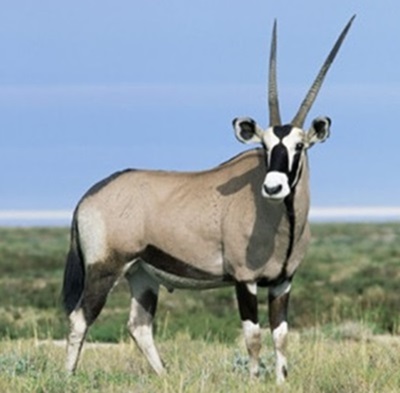 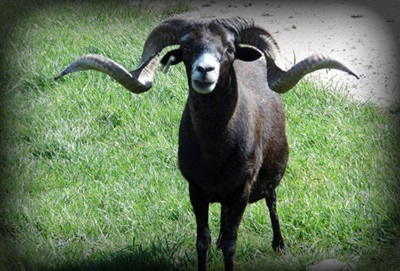 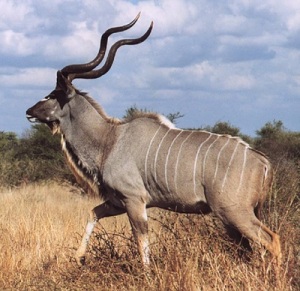 The Greater Kudu is a woodland antelope found throughout Eastern and Southern Africa.  Greater Kudus have a narrow body with long legs and their coats can range from brown/bluish-grey to reddish brown.  They have between 4-12 vertical white stripes along their torso.  Trophy Bull Kudus have horns that measure over 50 inches and they weigh about 600 pounds.  Cotton Mesa has a very rare breeding herd in the state of Texas.  Trophy Kudu are one of the most sought after trophies in Africa. Often times called “The Gray Ghost.”  Cotton Mesa does harvest a few Trophy Kudu bulls each year. 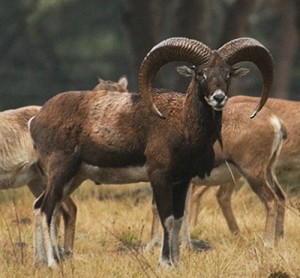 Mouflon Sheep have red-brown, short haired coats with dark back-stripes and light-colored saddle patches.  Today Mouflon range wild in the Caucasus Mountains in Iraq.  Cotton Mesa Trophy Whitetail is home to some great Trophy Mouflon and as all sheep may be hunted year round. 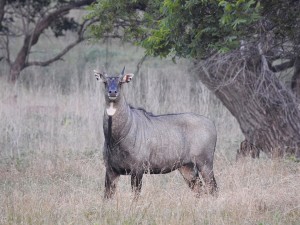 Nilgai antelope are the second largest member of the antelope family, with the older bulls often being referred to as “blue bulls”, as the dominant males typically become very dark, taking on a blackish and blueish hue. These are large, sturdy animals with mature bulls weighing upwards of 600-700 pounds on the hoof. Trophy size nilgai antelope bulls will normally sport vertically oriented horns measuring 8.5” – 10” in length. Nilgai antelope can present a challenging and fun hunting experience, as they very skittish, and their keen eyesight is atop an elongated neck, making it difficult to approach them without being spotted. 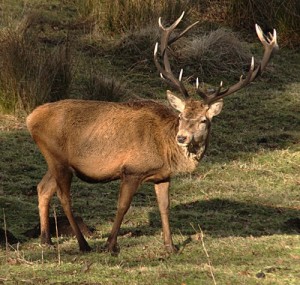 Red Stag are one of the largest deer species.  The Trophy Red Stag inhabits most of Europe.  They are similar to the larger bull Elk which it can also cross breed with.  Trophy Red Stag bulls at Cotton Mesa can weigh as much as 550 pounds.  The meat is very lean and heart healthy. 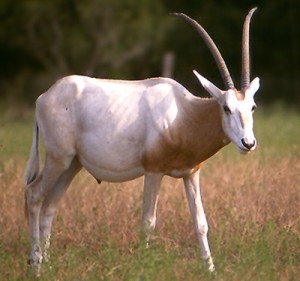 The Scimitar Oryx, or Scimitar-Horned Oryx, is a species of Oryx which formerly inhabited the whole of North Africa. Its coat is white with a red-brown chest and black markings on the forehead and down the length of the nose. The horns are long, thin and parallel and curve backwards (like a scimitar) and can reach a meter to a meter and a quarter on both sexes, male and female. Scimitar Oryx can survive without water for many weeks, because their kidneys prevent loss of water from urination and they can modify their body temperature to avoid perspiration. 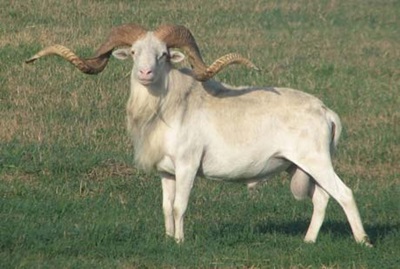 The Texas Dall Sheep is a much sought after color phase of the Corsican Sheep.  Cotton Mesa has

a large selection of Trophy Texas Dall Sheep and they can be hunted year round. 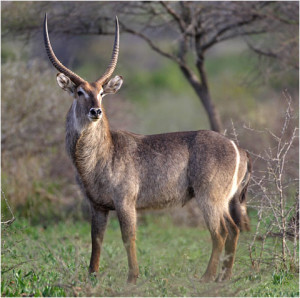 Their coats are reddish brown in color and become progressively darker with age; they have a white ‘bib’ under their throats and a white ring on their rumps surrounding their tails. The waterproofing secretions of the waterbucks’ sweat glands produce an unpleasant odor in its meat, unless the animal is skinned carefully. The long spiral structured horns, found only in males, sweep back and up. Waterbuck are found in scrub and savanna areas near water where they eat grass. Despite its name, the Waterbuck does not spend much time in the water, unless escaping predators. Waterbuck are diurnal. Females gather in herds of between two and six hundred individuals. Males keep territories of around three hundred acres during their prime.  Cotton Mesa Trophy Whitetail has a natural breeding herd of Waterbuck and will harvest a couple of Trophy Bull Waterbuck each year. 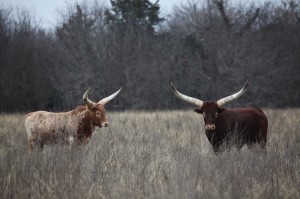 The Watusi is also know as Ankole Longhorn, which is a wild oxen originally native to Africa.  Its large, distinctive horns, that can reach up to 8 feet from tip to tip, are used for defense.  At Cotton Mesa Trophy Whitetail, we have a breeding herd of Watusi and they are sought after for their meat as well as Trophy value.  A large Trophy Watusi can weigh up to 1,600 pounds and has very lean meat. 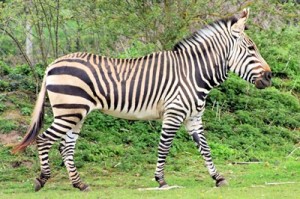 Cotton Mesa Ranch has an amazing Texas Zebra hunt experience planned for you for a memory that lasts a lifetime. Domesticating Zebras is one of the toughest tasks for humans because of their wild and untamed nature therefore Zebra hunting is a big challenge. They are very social animals that live in large herds.  They are native to most of  Sub-Sahara Africa.  Cotton Mesa does have a breeding herd of Zebras and does harvest a few select stallions each yea